South Island First Nations from Nanaimo to Saanich come together to sign a historic Accord.

On November 27th, 2019, after over a year of negotiations, talks and culturally appropriate ceremonies, the IEȽȻIȽTEL or Nuts’a maat kws ‘i’ shul’ hwilasmut tu Skwul ‘i’ kwthe’ Accord was signed. 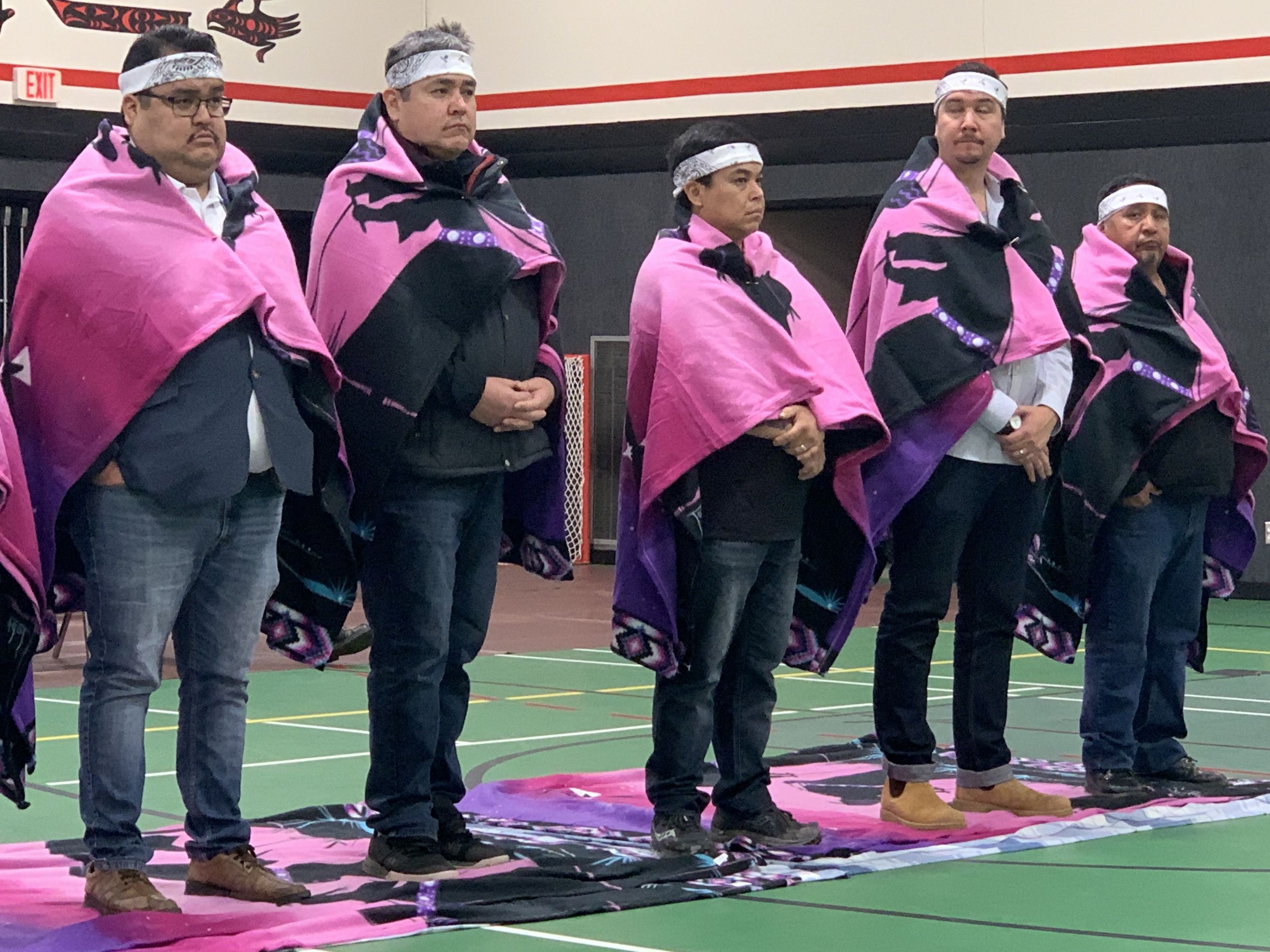 Working with NEȾOLṈEW̱ / Nutsa’ maat shqwaluwun (one heart, one mind), the coalition of Nations intends to take up and take back the roles, responsibilities and authorities over the territories and waters that have been so far denied or impeded. This includes issues related to Parks Canada’s operations and proposed operations within the territories, including the Gulf Islands National Park Reserve and the proposed Southern Strait of Georgia National Marine Conservation Area Reserve. 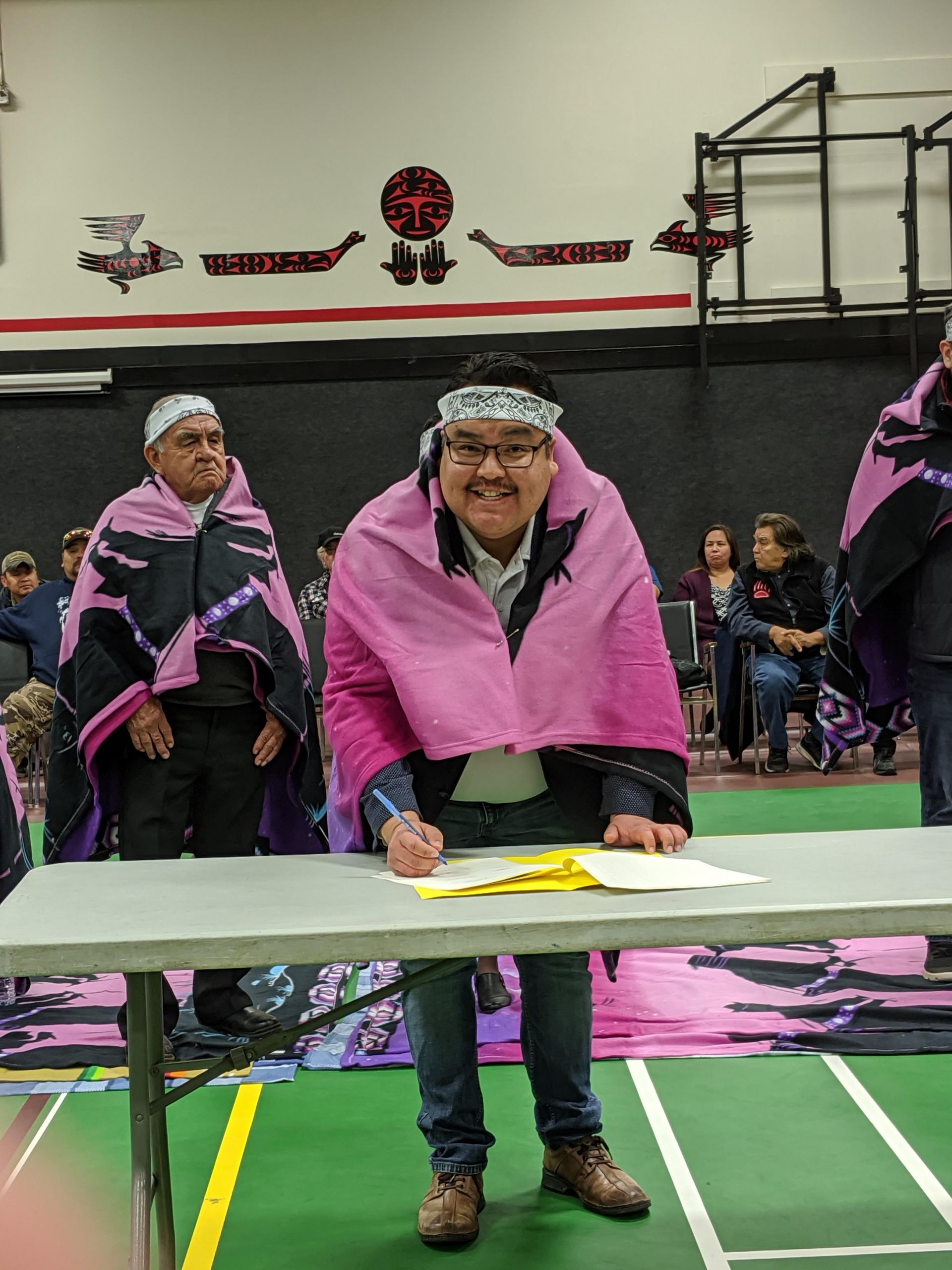 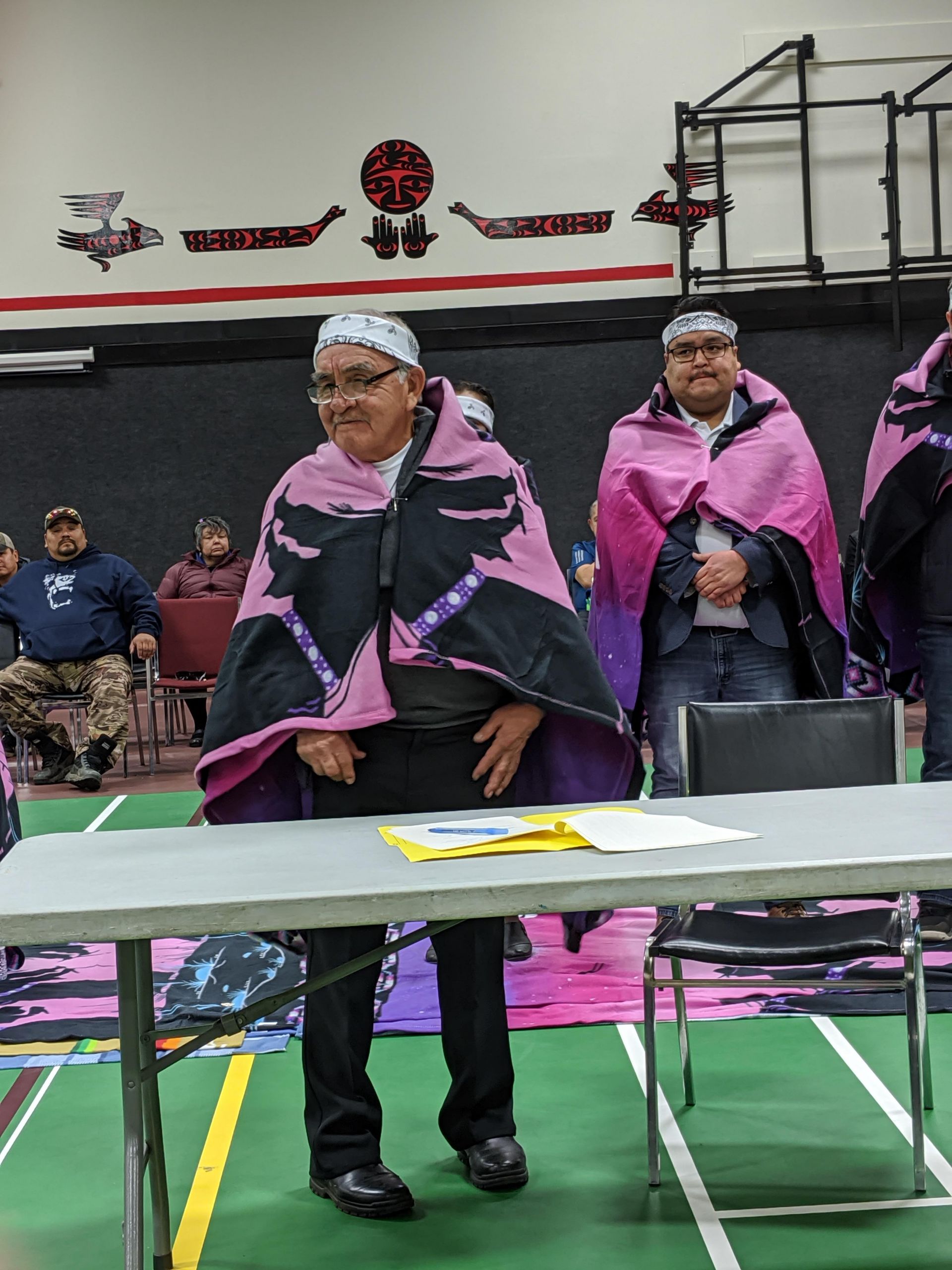 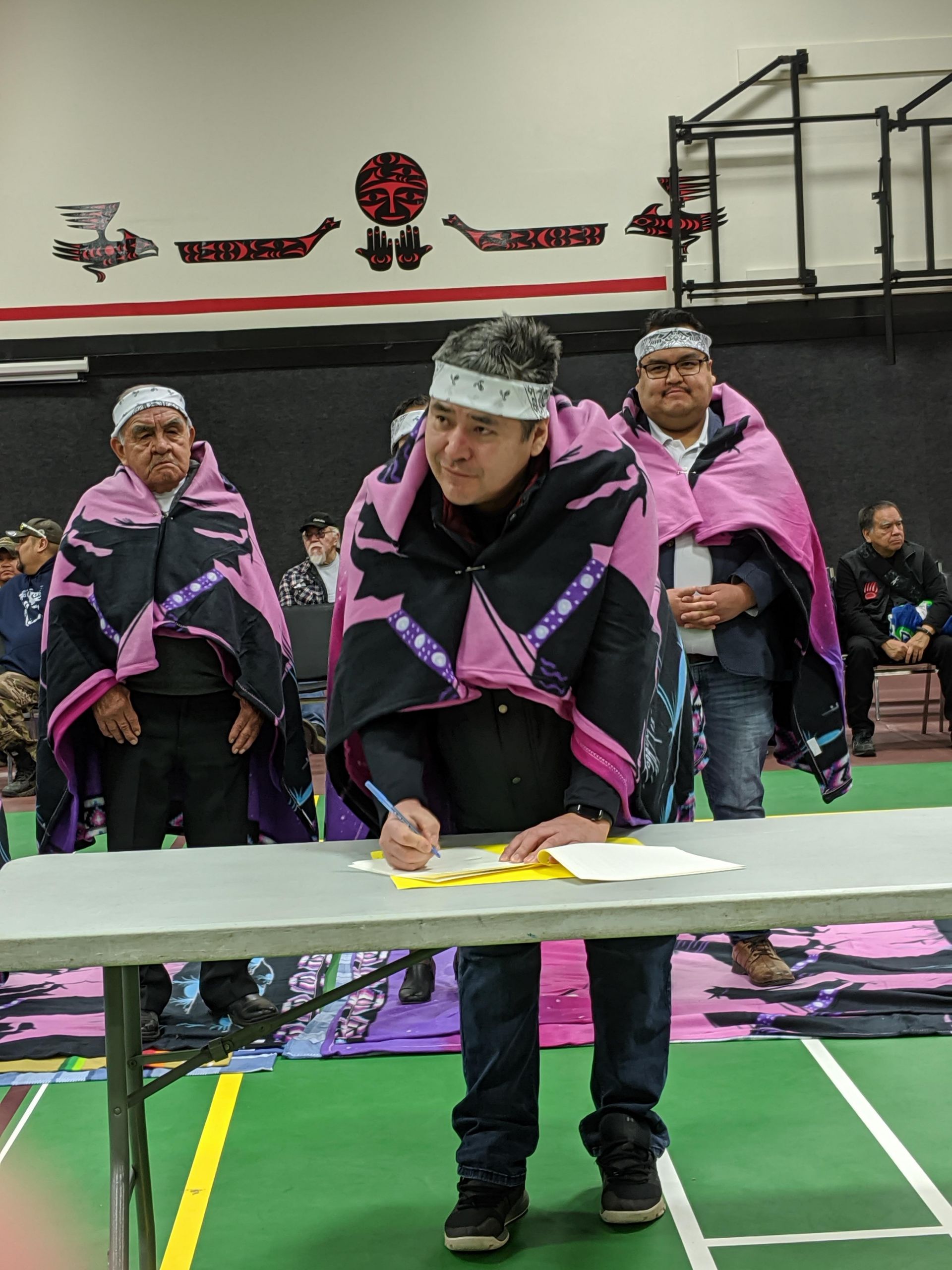 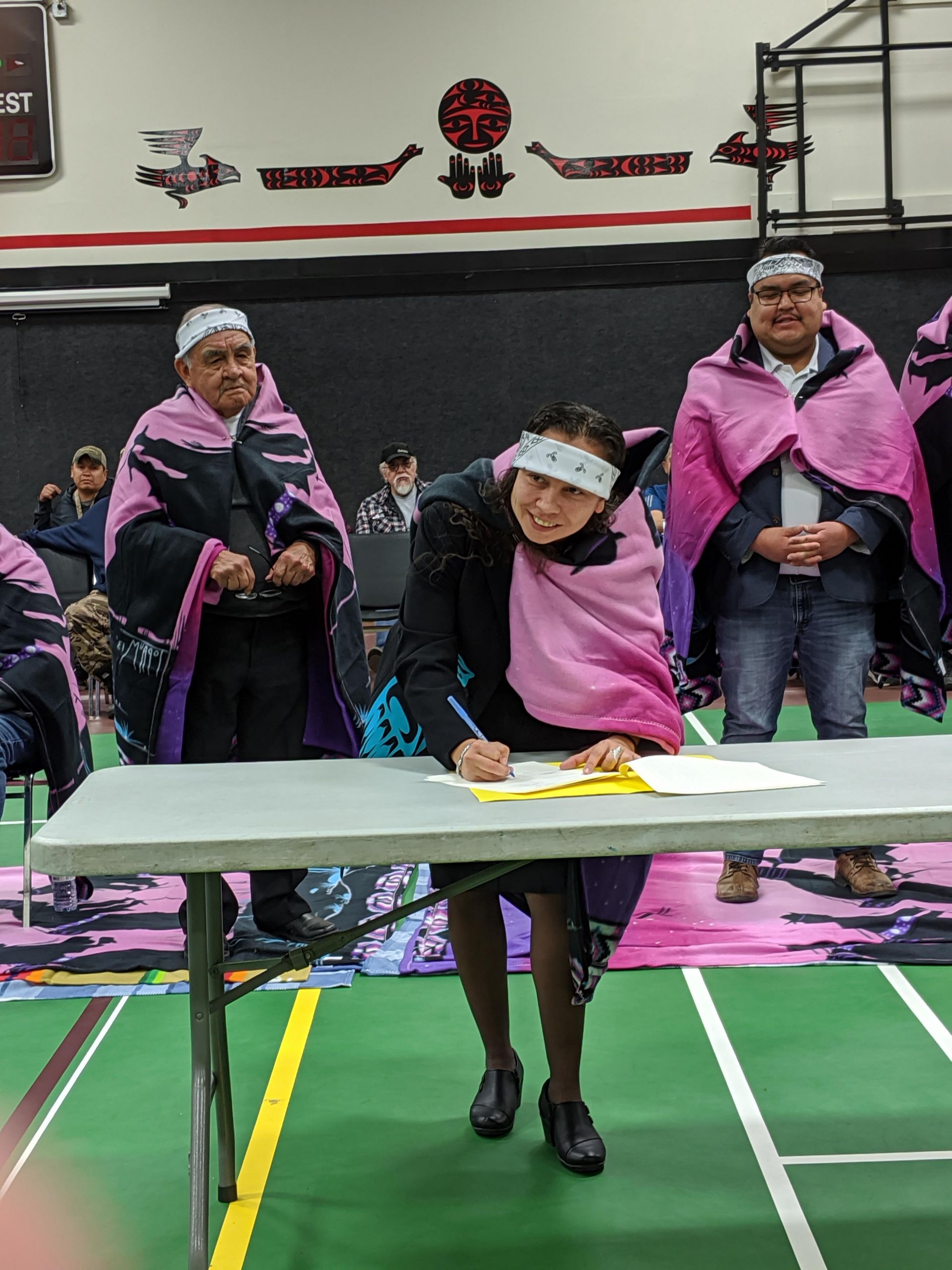 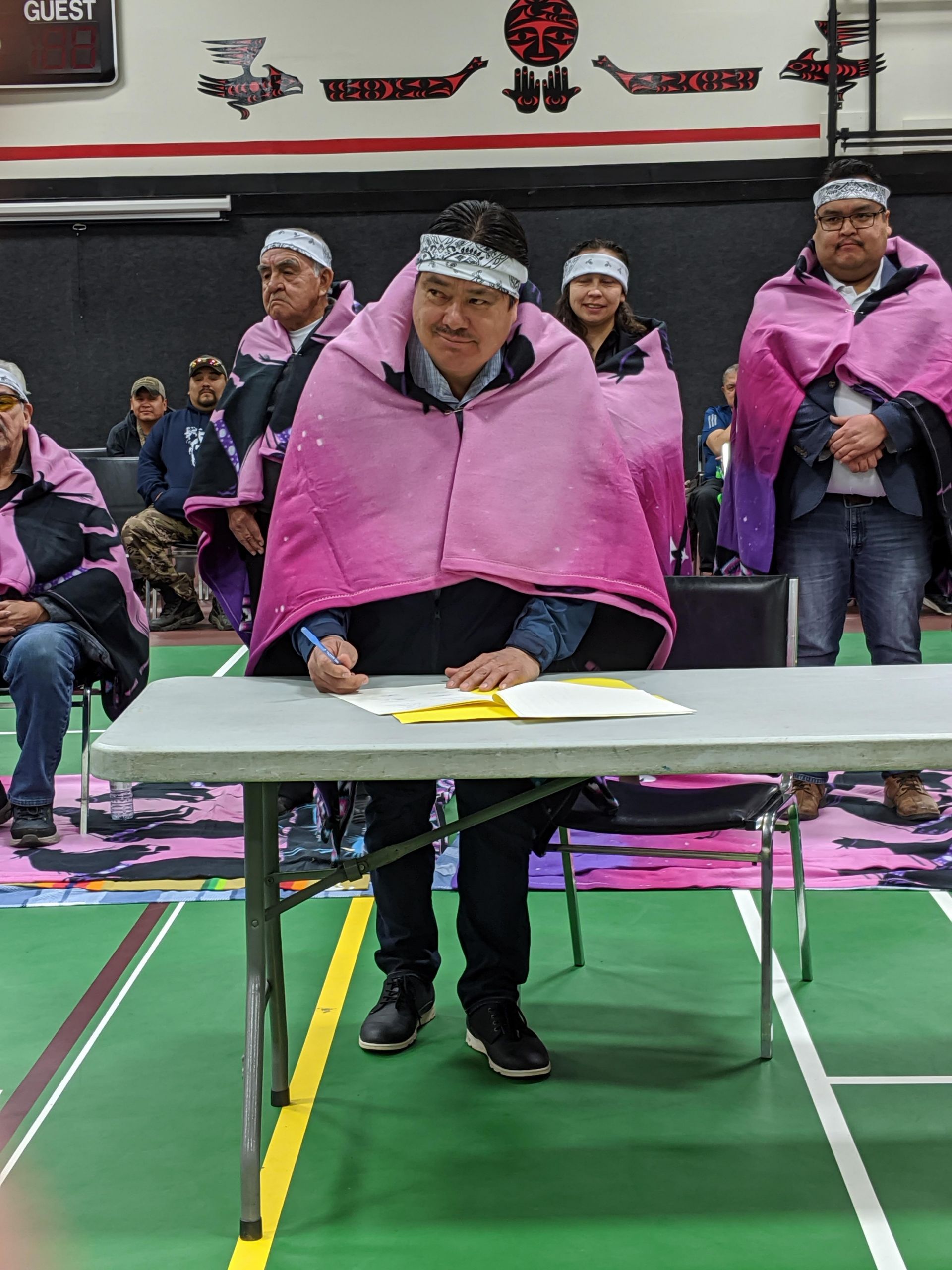 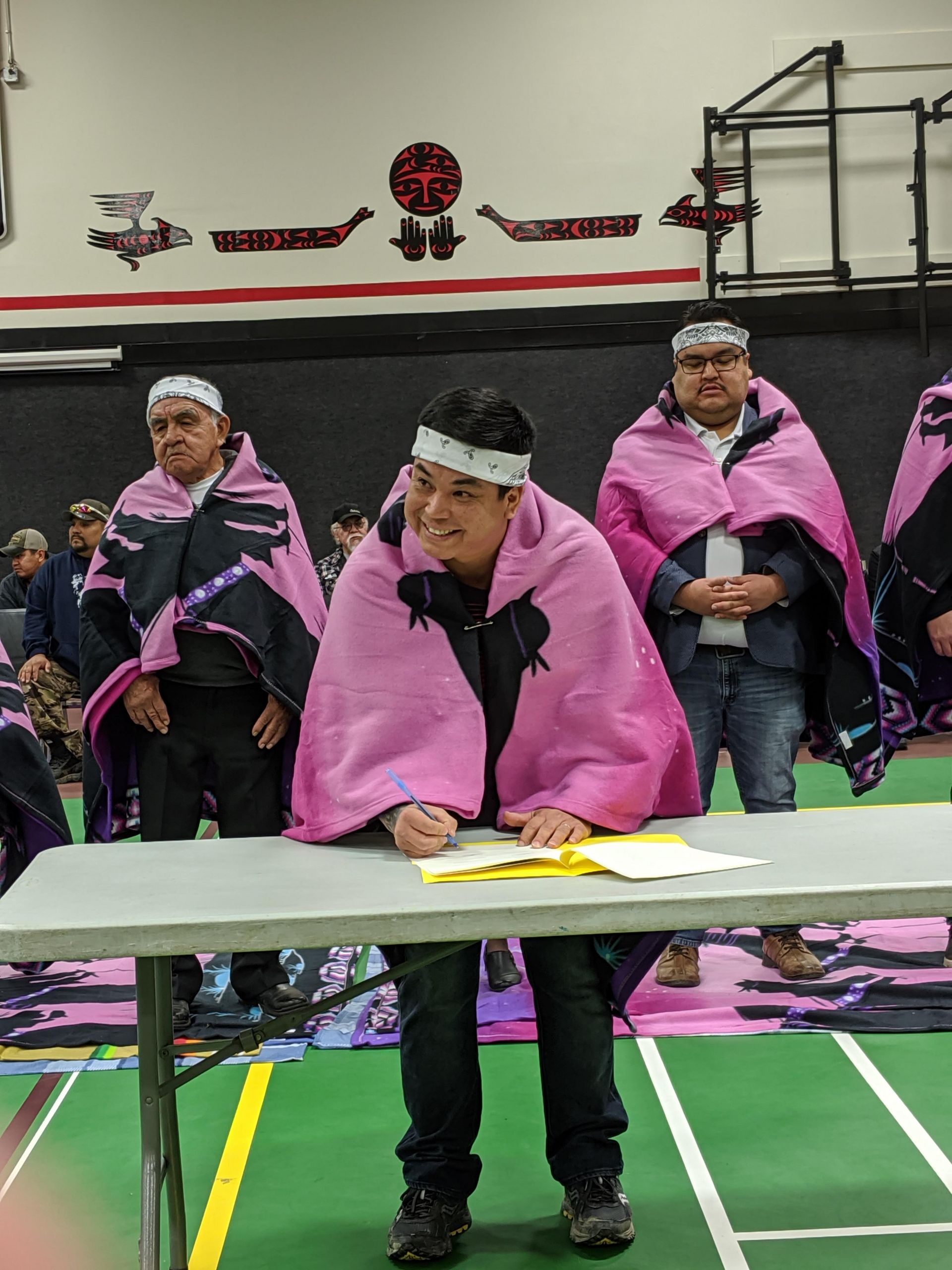 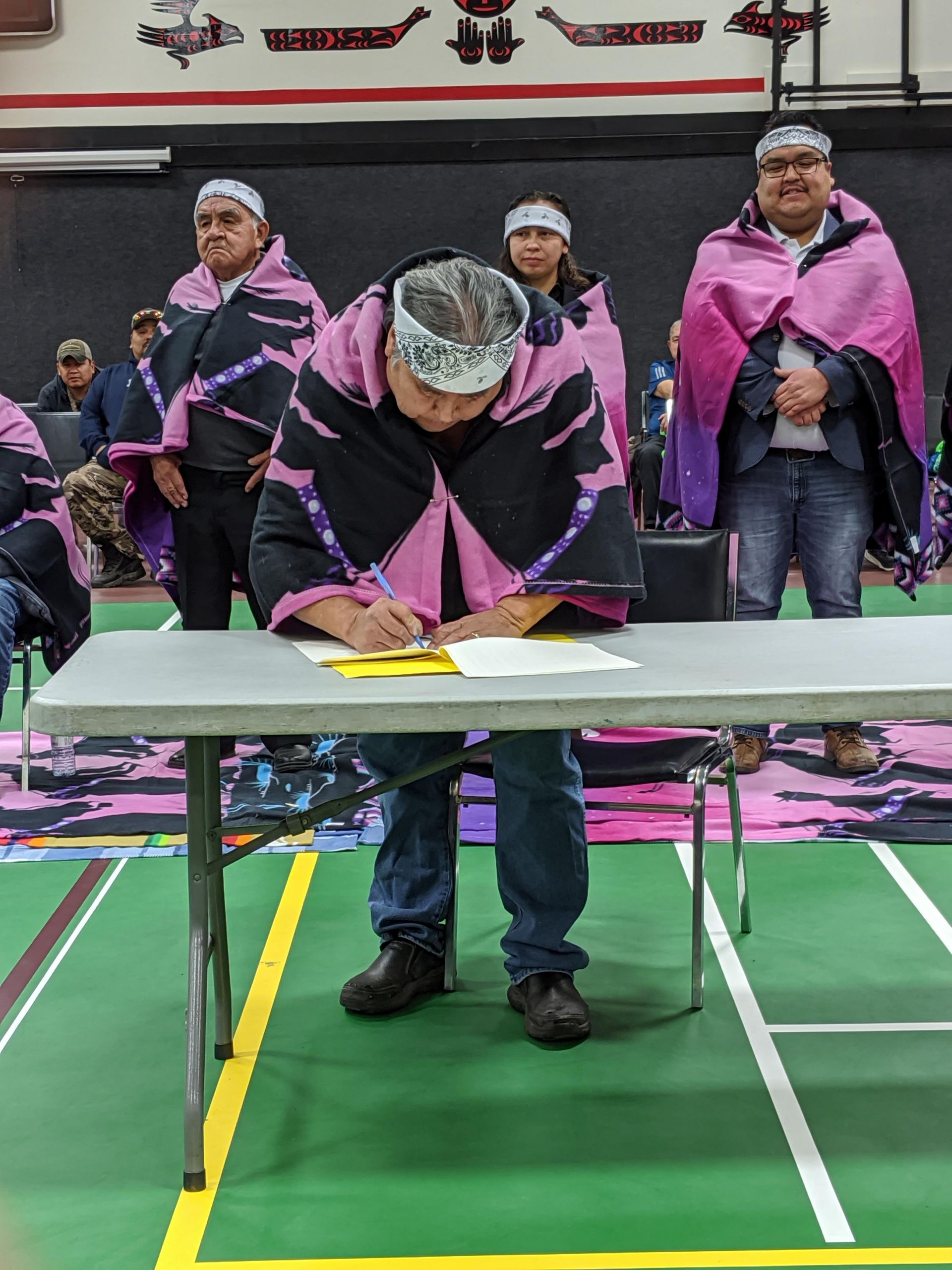 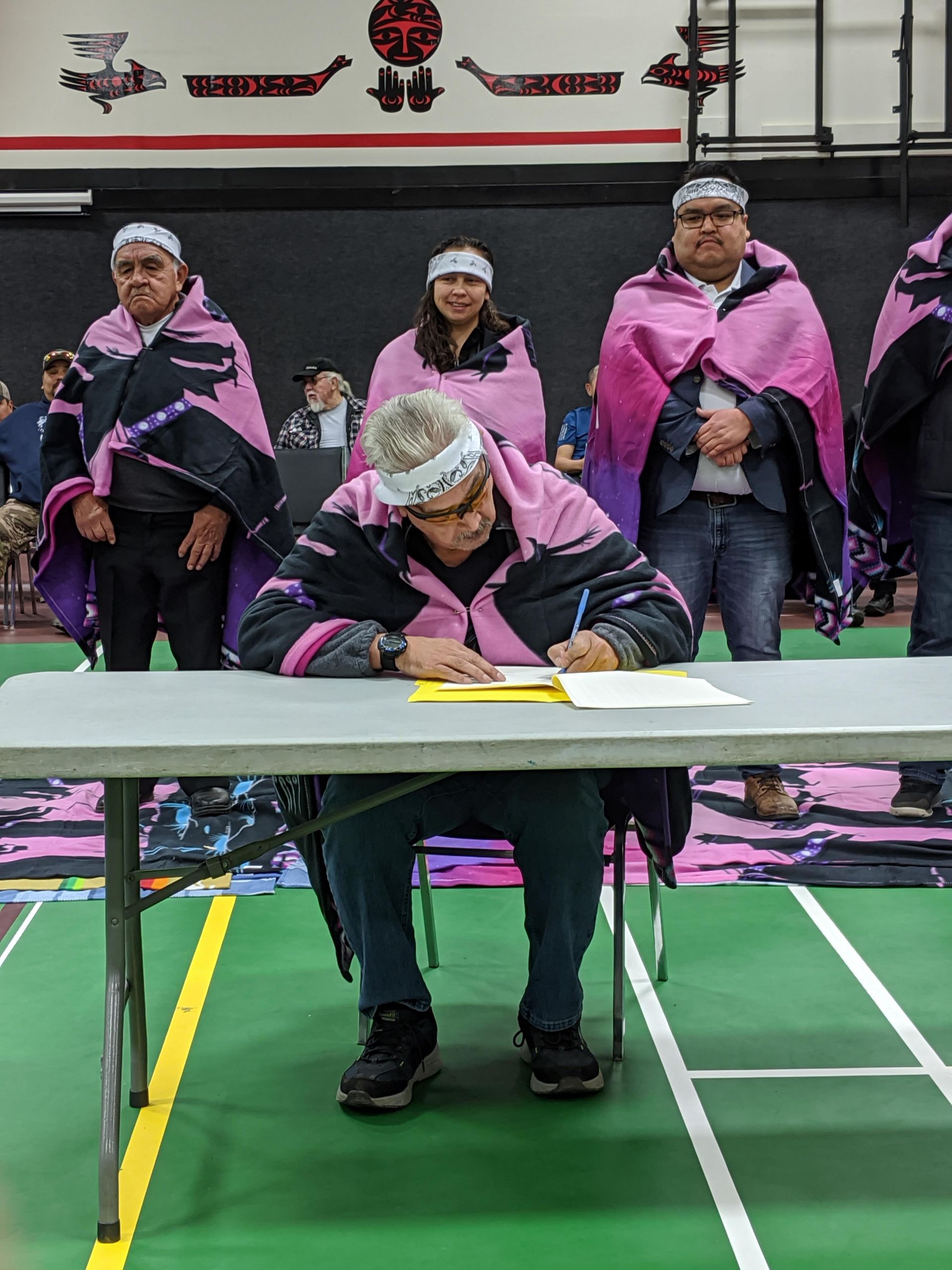 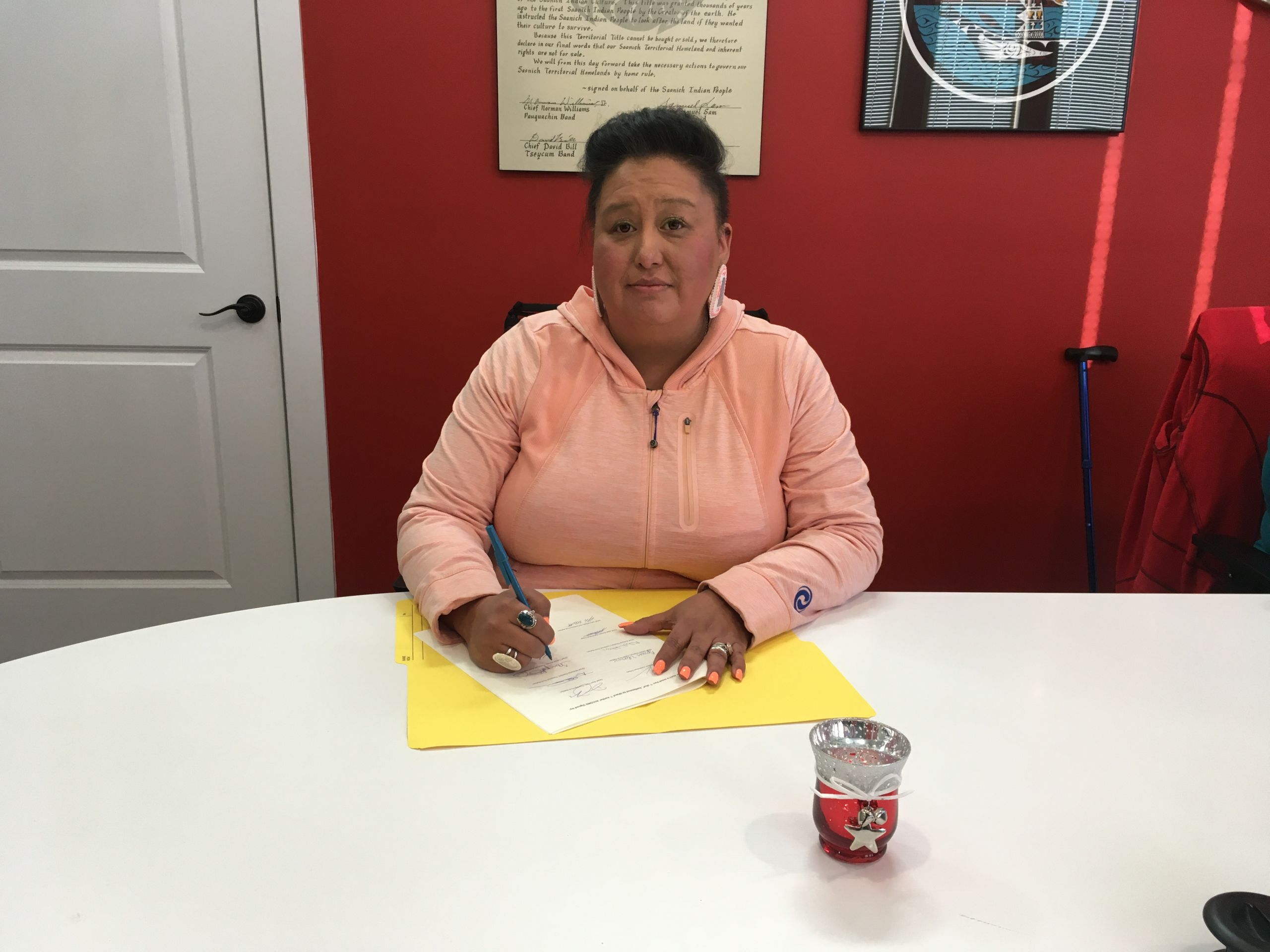 Roughly translated from SENĆOŦEN, the IEȽȻIȽTEL Accord means “paddling together out at sea”. In Hul’q’umi’num’, Nuts’a’ maat kws ‘i’shul’ hwilasmut tu Skwukwuth’e’ means one whole group paddling together to look after the Gulf Islands.

The IEȽȻIȽTEL Accord represents a monumental step to move beyond the damaged legacy of colonialism.

While Indigenous people have persevered, the colonial government–including Parks Canada–continues to asserted land ownership claims that severely impede Douglas Treaty rights, Aboriginal rights and title, as well as the rights and responsibilities gifted by Creator. The loss of land to settlers, the nonconsensual establishment of protected areas, and the denial of a role for Indigenous governance in the region have exacerbated the devastating economic, political, cultural, social and environmental impacts that Indigenous people continue to feel to this day.

The IEȽȻIȽTEL Accord means the First Nations between Nanaimo and Saanich are wholly united in their efforts to oppose further violations, specifically with reference to Parks Canada’s operations in the region.

W̱IĆKINEM (Eric Pelkey) said, “This agreement is going to open the doors to work together on many other common concerns. Already, in just a few days, other issues have come up that will require us to work together. It’s such a precedent for us.”

While this Accord is historic, it is also a natural evolution of the numerous collaborations between South Island Nations to defend the territories against harm.

Ending in the mid 1990’s, the South Island Tribal Council was a unified body of similar spirit, comprised of 19 nations from Qualicum, south.

There are countless other examples of unifying for a common goal. Most memorably, the Battle of Maple Bay ended the repeated invasions of the Kwakwa̱ka̱’wakw Lekwiltok within the Coast Salish Territories. Coast Salish groups between the Cowichan and Saanich came together in fierce defense and put a permanent stop to the pillaging of villages within their territories.

Another more recent collaboration between Nations was during the Grace Islet controversy, where a private resident obtained the permits from the province to build a mega-mansion on Indigenous gravesites. In spite of significant opposition, the First Nations were able to unite in order to defeat the plan to effectively desecrate ancestral burial grounds.

By acting with NEȾOLṈEW̱ / Nutsa’ maat shqwaluwun (one heart, one mind), the First Nations enhance their strength and ability to defend their territories against harm. As such, the IEȽȻIȽTEL Accord is more than a precedent setting agreement. It is a real path forward to improved social, economic and cultural conditions for Coast Salish people, through the revitalization of our relationship with the land, sea and all living creatures.

Roughly translated from SENĆOŦEN, the IEȽȻIȽTEL Accord means “paddling together out at sea”. In Hul’q’umi’num’, Nuts’a’ maat kws ‘i’shul’ hwilasmut tu Skwukwuth’e’ means one whole group paddling together to look after the Gulf Islands.